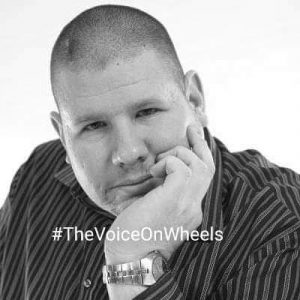 At birth, Doug was diagnosed with a condition called Spina Bifida and the doctors gave him a 2% chance of survival.

He was expelled from the first mainstream school he attended in Grd.1 because he had a disability. He has also been denied work opportunities due to discrimination against people with disabilities.

This is just the surface of the pain Doug has endured in his life. However, Doug has overcome every challenge put in his path and now has a successful career in media. Doug began his career in the media space in 2004 presenting a show focusing on Disability and People with Disabilities on Radio Today. He joined Radio 2000 in 2007 where he still works to this day.

Doug has fought for the rights of Persons with Disabilities for most of his life. He has always used his time behind the mic as well as in his personal capacity, to promote, highlight, discuss and educate on all things disability-related. Doug has won many awards and has been recognized at the highest level for his work in disability, most notably having a National Order, The Order of The Baobab: Silver bestowed on him by President Zuma in 2015 and most recently receiving a Lifetime Achievement Award from Premier Makhura at the Gauteng Disability Excellence Awards on 3 December 2019.

“I have been discriminated against many times, I have been judged, belittled, teased, spat at, humiliated and much worse because I have a disability. I have also been teased, mocked, humiliated and more because of my physical scars. I have made it my life’s mission to change attitudes, to change mindsets toward disability and Persons with Disabilities. My mission is to ensure that no child with a disability goes through what I have gone through in my life. There are many barriers, be it physical or attitudinal, that Persons with Disabilities face daily. I have dedicated most of my life fighting for the rights of Persons with Disabilities, for inclusion, for acceptance and I will continue to push for as long as I am alive.” says Doug.

Casual Day is a fundraising and awareness project of the NCPD in support of Persons with Disabilities.